Here is a free pattern to make some teeny tiny toys - just under 2.5 inches (6 cms) tall.

It's a wee bit fiddly but lots of fun! 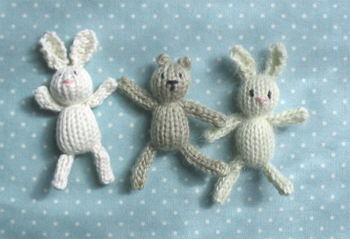 What you will need:

some left-over scraps of 4ply yarn in pink, black and fur colour (brown/ cream / grey...) a small circle of felt (for the back of the face - to prevent the tiny stitches pulling through), 1 pair of 2.25mm needles and 2 double pointed 2.25mm needles.

You can use thicker yarn and larger needles for a larger sized toy, eg: 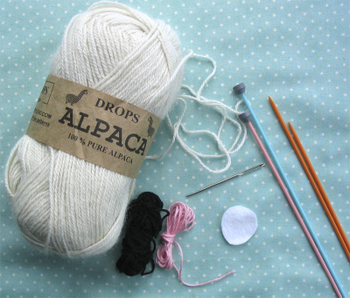 With your fur colour yarn and 2.25mm needles cast on 13 stitches - leaving a tail of around 5 inches for sewing up later.

Purl the first row and knit the next. Continue in stocking stitch until work measures 1.5 inches (4cms), approx 18 rows in total. 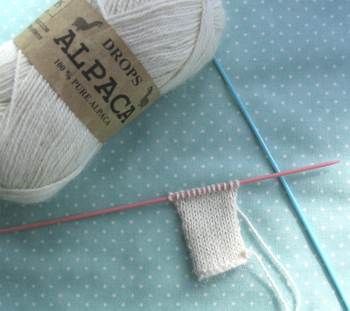 Cut the work from the ball of yarn leaving around 6 inches for sewing up and thread a needle with this end. Thread the cast off end through the stitches on the needle. 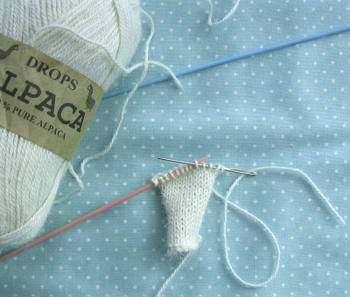 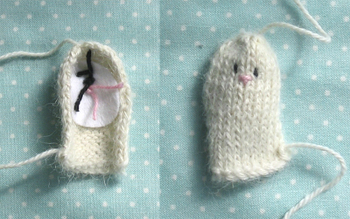 Place a small ball of stuffing behind face and join the back seam of the body using mattress stitch (follow link & scroll down). Tie a length of yarn tightly around the body around half way up to give your toy a neck and thread ends through the body before trimming off excess (if you prefer a neater finish to the neck see an alternative method here). Stuff the body cavity. Thread a needle with the cast on tail and use this to catch up the loops around the bottom of the body. 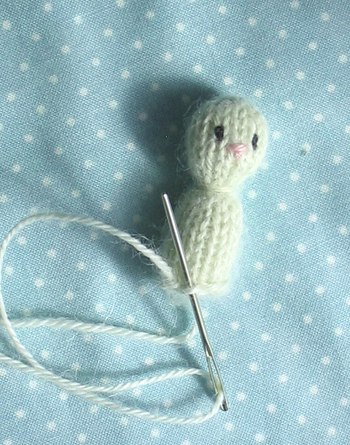 Pull up tightly to gather seam and seal body cavity. Tie off tightly and thread ends through the body before trimming off excess.

Now make the limbs (4 the same). Cast on 4 stitches with the double pointed needles and knit a short i-cord - around 6 - 8 rows in length. Cut the work from the ball and thread end through the stitches on the needles and then through the middle of the work - knotting it securely to the cast on tail. 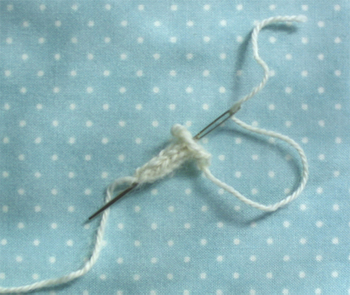 Cut the work from ball of yarn and thread the end through the last stitch to cast off. Using the cast off tail thread this through the centre of the ear and tie to cast on tail. 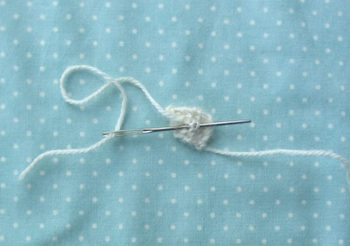 (To make ears for a bear cast on 3 stitches, knit 1 row, cast off 3. Tie cast on and cast off ends together tightly and sew in place.)

Assemble all of the body parts. 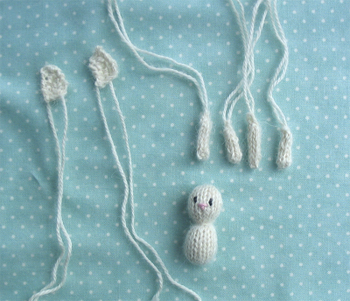 Join the ears to the top of the head with a few stitches. Knot ends securely together and thread through the body before trimming excess. 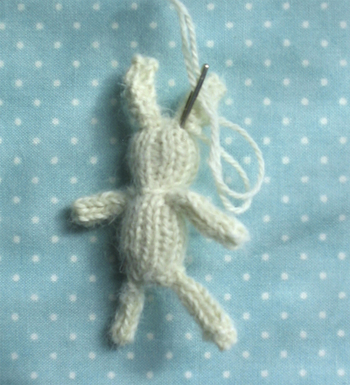 Repeat with all of the limbs. And there you have an itty, bitty bunny! 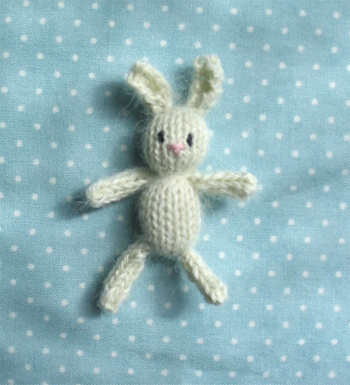 And if you fancy you could make your teeny tiny toy a little snack: 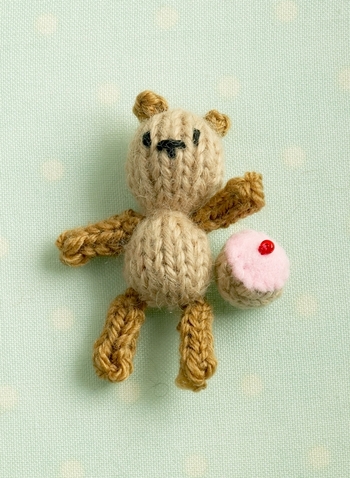 Tie both cast on and cast off ends together and thread a needle with one end, gathering the edges in to make a ball - stuff with a short length of same colour yarn. Tie off the ends and thread through the ball before trimming off.

Cut a small circle of felt, sew a seed bead in the centre as a cherry, tie off and trim thread ends on the back. Sew the felt circle over the sewn up end of the knitted bun.

Julie I love your work your a very talented lady but you have excelled yourself with these tiny toys, they are sooo cute. I saw the picture of Honey with her little bunny and its so sweet, the person who manages to get their paws on her will be one lucky owner. Thank you for sharing the pattern its very kind of you. Keep up the amazing work.
♥ Raynor

You are so very talented. What makes it even better is that you're also so very generous. Thank you for posting this. They are so flippin' kee-ute! Love, love, love!

These are really darling. Thanks for posting the pattern and the helpful detailed photos.

so, so cute! thanks for sharing your creativity!

Julie, you are just so big-hearted. Thank you so much.

Oh GORGEOUS! Where are my needles ...

So adorable!! Thank you so much for sharing the pattern. :)

These are adorable! Thank you so much, and for being so generous about selling them for charity too. I will make a few of these lovely little ones, and sell them to raise money for the Unit that is treating me . . .

I really loved making the bunny and the flower. Thanks so much for the pattern

wow these are amazingly cute! the instructions and pictures are great too, I'm going to start making a bunny right away.

O joy! Just what I was hoping to find when I cast my search net this morning. Adorable!

Nice to see u r all kids stuff .I am alos intrested to learn knitting basic things .If u have more pattern guide by email .

These are really sweet :)

hi, what a fab site and great cutties. my daughter is collecting monkeys for my new gandson, would it be possible to email the pattern.

Those little guys are so cute. I need to make some.

Thank you for such a wonderful little teddy pattern. My grandson was born a sleep at 22 weeks and this was the perfect size for him, as all other sized patterns were much too big, it also meant i could give him something personal and so that he was not alone. Once again thank you.

So cute, I love them all, thank you for the pattern!

Do you think I could use bigger yarn and needles? This would be a great project for young knitters. A quick accomplishment to encourage the craft. Replies?

well, instead of getting in the shower I have just spent the last hour and a half knitting and dressing a tiny teddy! I could sit and knit these all day! I will put her on my blog later...you are amazing and so generous sharing this delightful pattern!

hello julie,
thanks for the teeny tiny pattern. i enjoy making the bunny... thanks again....

I usually have a very hard to reading knitting patterns so I have been struggling with my knitting. I found this very easy to follow and for the first time the instructions didn't feel like they were in a foreign language.
I just wanted to thank you. This one post has given me a boost of confidence I won't soon forget.

You do wonderful work. From reading your blog you certainly have your hands full and I wish you luck and prayers. You really need to publish your patterns. You could make some money. I know I would buy a book of your patterns. I love them and would really love to make them,I hope to be a grandmother soon. Good Luck....

You are so kind to allow me to knit these cute stockings. I am not such a good knitter but will try for Christmas. God bless

What a gorgeous, cute little bunny. Thank you so much for posting this. I'm currently making a smock for each of my friend's two girls and a sweater for her boy and I wanted a little toy to put in the pockets, so this is just perfect.

Hi! Love the critters....do you have a pattern to make a little monkey? I have a group of friends helping me make up some of the bunnies and bears to take to South Africa and would love to know how the monkey is made. Thank you

hello I love all your rabbits (honey) and the mice do you sell your patterns, I knit a lot of toys which I donate to my Grandchildrens Christmas school fete, as they are always looking for extra cash, and I am always looking for new patterns and ideas amny thanks Rose

Seriously, amazing!
My first ever knitted toy (crochet convert)
and this pattern was so well explained and is so incredibly cute!
Thanks so much!
This totally made my night :D

I am going to quit my job and just knit cute little bunnies and kitties and teddybears forever. Found you via Penguin UK's blog, which I found via Twitter, by the way.

The comments to this entry are closed.

Other places you'll find me...